It’s here. Visa has released its new global dispute resolution process: Visa Claims Resolution (VCR). All disputes will be processed through the VCR. And it will be moderated by Visa’s automated tool, Visa Resolve Online (VROL).

Time frames are getting shorter. Legacy reason codes will be consolidated. And there’s a lot to know about this process. Here’s how the VCR will affect dispute management as we know it.

You can skip ahead to learn about the new time limits and its methods in dispute resolution. But here’s the story why Visa created the VCR. It's a story that involves eliminating manual labor and saving time for Visa and you. It also introduces new dispute reason codes into the process. Let's begin.

The New Process in a Nutshell

Visa Claims Resolution was just an idea. But after Visa found that it takes about 46 days to resolve a chargeback, they realized a lot of money was being burned in this process. And not just their money. But money that belonged to merchants, processors and ecommerce platforms.

And 46 days was Visa’s average in dispute resolution. Sometimes it’ll take more than 100 days to resolve a dispute. That’s over three months of you worrying about the outcome. That sucks.

That’s why Visa created the VCR. It was designed to reduce time, cost, and the number of chargebacks.

What Opportunities Are There With Visa Claims Resolution?

You won’t have to worry about invalid chargebacks. The VCR helps the VROL reject invalid disputes. This will help prevent disputes that either have no merit or are detected as fraud. That will let Visa stop a dispute from becoming a chargeback. This is great when a cardholder files a dispute after a certain time limit. That dispute will not be valid. VROL will also set a minimum criteria for a dispute to be further processed.

It may seem like a lot of action for dispute resolution. But that will reduce the amount of unnecessary chargebacks. It will only issue legitimate chargebacks that demand your attention. And the VCR dispute codes will help you understand why the chargeback occurred. These codes are more specific point out a dispute. And that saves time for everyone in the process. It’s great that real-time resolution is becoming a new mode in dispute management.

Merchants had 45 days to respond to a Visa chargeback before the VCR went into effect. Now they have 30 days to submit a response. But don’t panic! The process is much simpler. Visa anticipates that its new process will reduce the exchanges between merchants, acquirers and issuers. That will result in a quicker resolution. Visa has set it expectations to resolve disputes within 31 days. It’s a bold move. But we’ll take their word for granted.

The VCR will have two workflows: Allocation and Collaboration. This is to reduce the process in dispute resolution. But it also streamlines it. Here’s what you need to know about these workflows.

It's assigned for fraud and authorization disputes

All fraud and authorization chargebacks go through the Allocation workflow. Visa will perform a series of automated checks. These checks will tell Visa a few things:

The dispute will be blocked if Visa detects any of those items. And it won’t become a chargeback.

That’s the good news. Here’s some even greater news. The Allocation workflow will result in less invalid chargebacks.

But there’s still a chance that a dispute will pass through the automated checks. That will tell Visa to assign liability to the merchant. But merchants can defend themselves on specific circumstances. But that will require clear, compelling evidence to prevent a chargeback.

A merchant's  response will have more of a burden in the process. You should be fine if your SaaS platform generates responses with relevant evidence on standby. It never hurts to start upgrading your services.

It's mainly assigned for processing error and consumer disputes

The majority of disputes go through the Allocation workflow. But some will require interaction between merchants, acquirers, and issuers. That's when the Collaboration workflow comes into play. It basically follows the same flow as today’s chargeback process. But its goal is to simplify communication between each party. And that will reduce the overall chargeback timeframe.

Visa Claims Resolution is all about streamlining the dispute process. The previous Visa chargeback reason codes are listed below:

Visa’s new process introduces four dispute categories. And it associates each code to its numerical label (Fraud – 10, Authorization – 11, Processing Errors – 12, Consumer Disputes – 13). This will place some reason codes into retirement. Visa Chargeback Reason Code 75 ‘Transaction not Recognized’ is one of them.

Here are the new reason codes. Feel to click on them to learn how you should respond to a dispute:

Visa will continue to provide data to merchants when they need it. Their goal is to help merchants understand the reason for the dispute. Issuers will also be required to fill out a Dispute Questionnaire. This lets them provide the necessary information to all parties before the dispute is initiated. And by ‘dispute’, they mean chargeback.

Let’s give you an illustration. This shows what compelling evidence is needed for fraud chargebacks of an ecommerce transaction for digital goods: 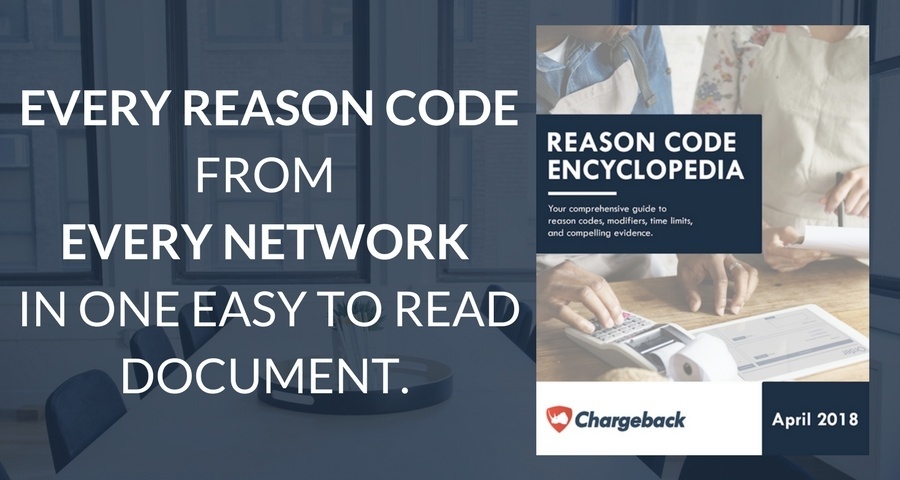 Specific copy changes are emphasized by red or blue text. Most of them are small changes. One example is changing ‘goods’ to ‘merchandise’. But VCR’s evidence remains relatively unchanged.

Visa Claims Resolution is expected to save time and increase efficiencies. Here’s what merchants should know about the new process:

How Merchants Should Prepare for VCR

Visa had to push back the effective date of the VCR from October 2017 to April 2018. That gave merchants more time to prepare for the changes. But the reduced timeframe will put more burden on dispute responses. And the requirements will be more rigid for fraud and authorization chargeback responses. It’ll have to adhere to Visa’s new rules and regulations.

You can only generate responses long enough to realize you need more firepower. You’ll need automation in order to submit your responses. But automation will work more efficiently if all the information was stored in one place. A place where cardholder information, gateway data and order details can be extracted by reliable APIs and programmatic software.

But this also requires a software that actually knows these reason codes. It has to stay updated on any changes from Visa. This software needs to work as if you never have to worry about learning a new reason code ever again.

Let Me Introduce the Chargeback App

The Chargeback App brings all of your data sources together with automated dispute management. That’s the key to real-time resolution. We’re excited to see Visa take on a similar path. But we’d love to see your team earn the benefits. Feel free to contact us to learn more about the Chargeback App. You can also request a demo in order to experience what is being offered to you. Until then, feel free to learn more about pricing. You can also read more material from our blog.